Filtering modern art and craft traditions through her own inventive sensibility, Melbourne-based artist Kylie Stillman transforms common materials into divine works of art. Her sculptures reveal a dexterous ability to work with a range of materials, from paper stacks and timber constructs to outdated book volumes and ballpoint pens. Not many artists make art by taking the subject away, but for Stillman this is the secret. When working with books, each sheet of paper is painstakingly carved by hand with a scalpel to create forms that emerge in absence.

Stillman completed a Bachelor of Fine Arts with honours at Royal Melbourne Institute of Technology (RMIT) in 1999. She has since held several solo exhibitions and participated in numerous group shows, including Wonderland, Museum of Contemporary Art, Taipei (2012), Size of Life, Gippsland Art Gallery (2010), Adelaide Biennial of Australian Art, Art Gallery of South Australia (2008), Snap Freeze: Still Life Now, Tarrawarra Museum of Art (2007), The Informal Garden, Gertrude Contemporary (2005) and Uncanny: The Unnaturally Strange, Artspace, Auckland (2005). Stillman has been awarded Australia Council for the Arts studio residencies in New York (2009) and Milan (2006) and she has been commissioned to create large-scale artworks for Hermes Australia (2011) and Westpac Banking Group (2010). 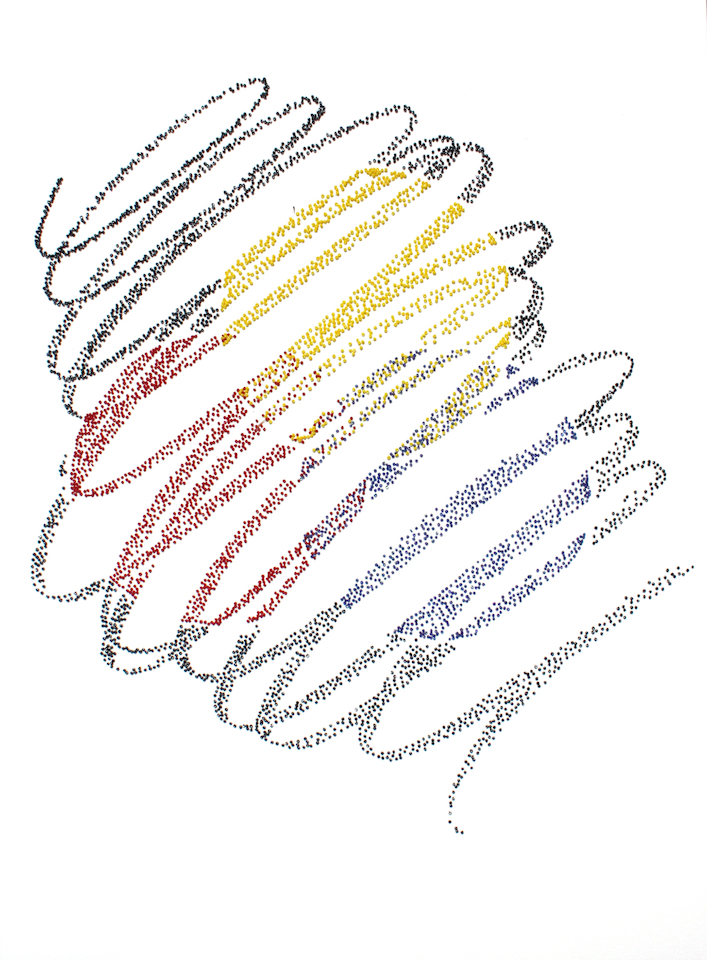 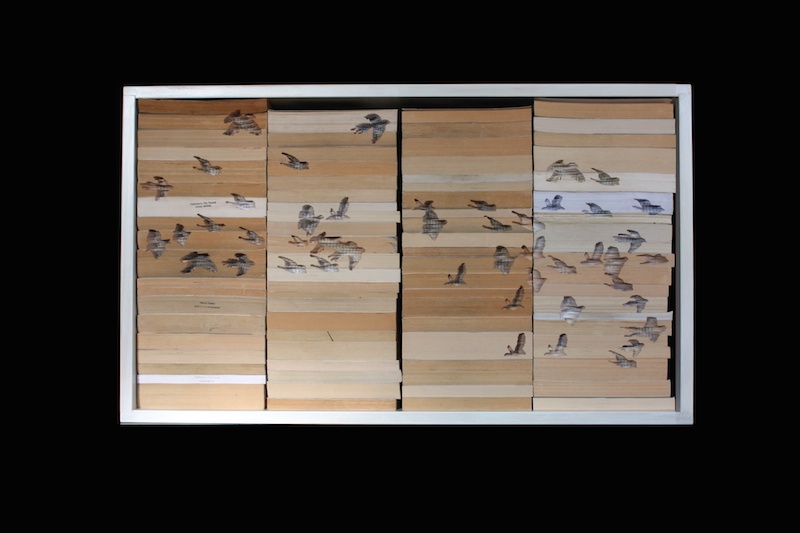 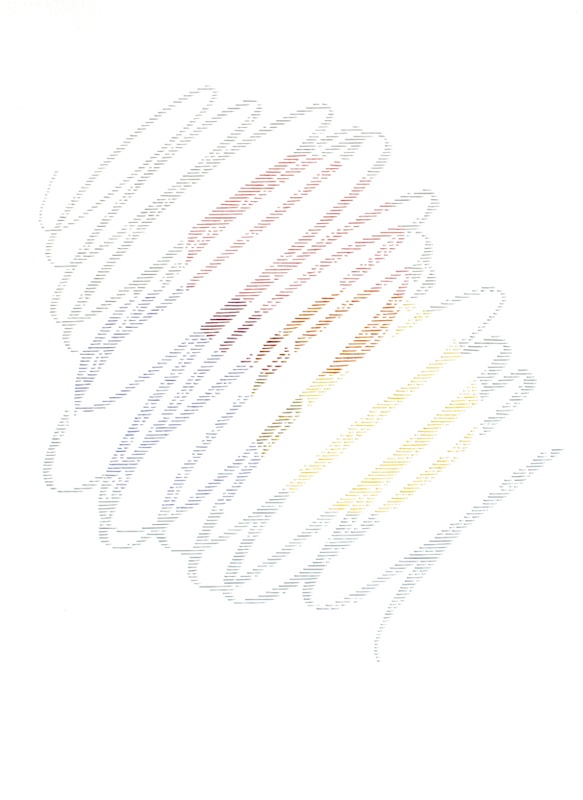 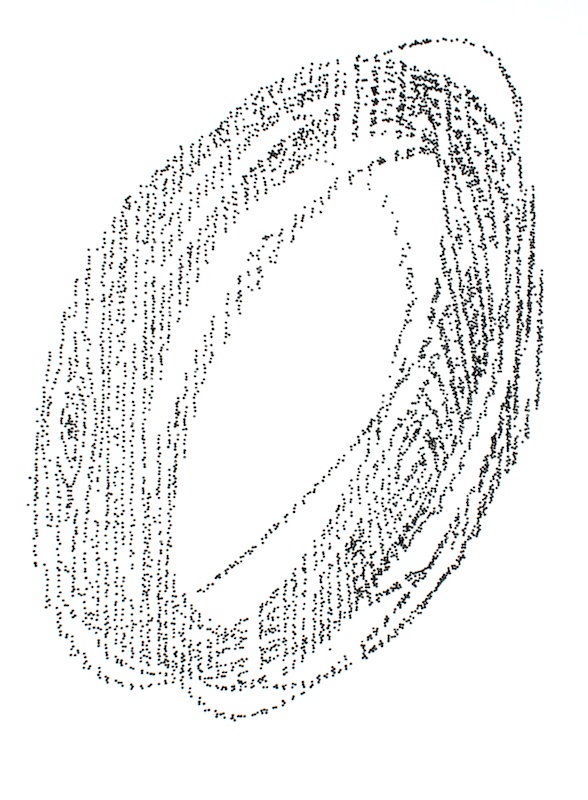 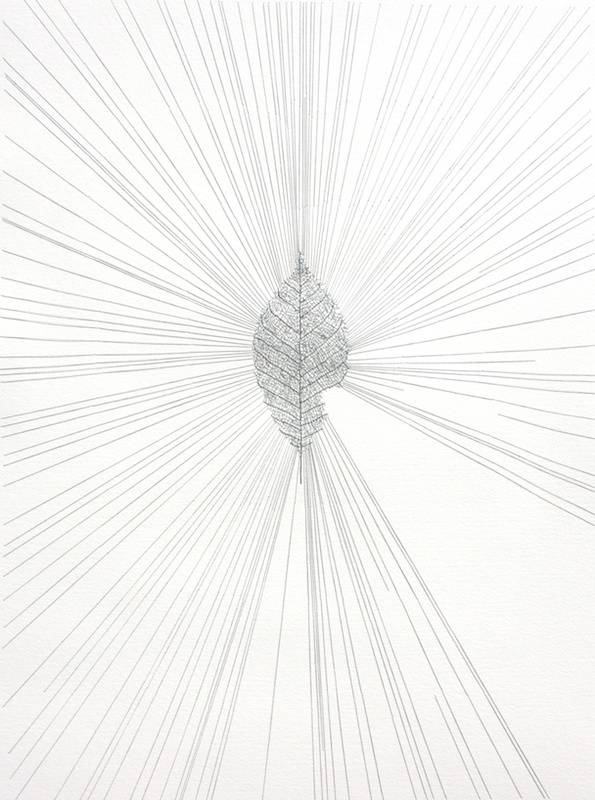 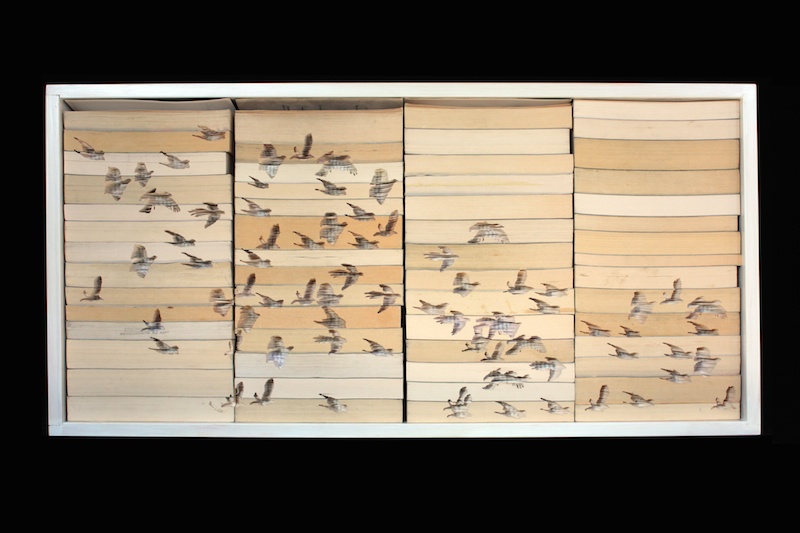 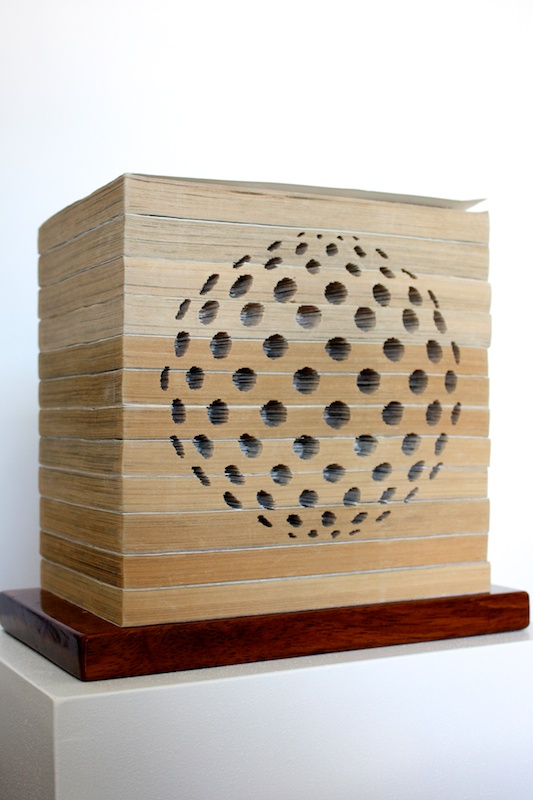 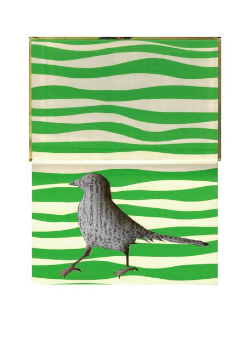 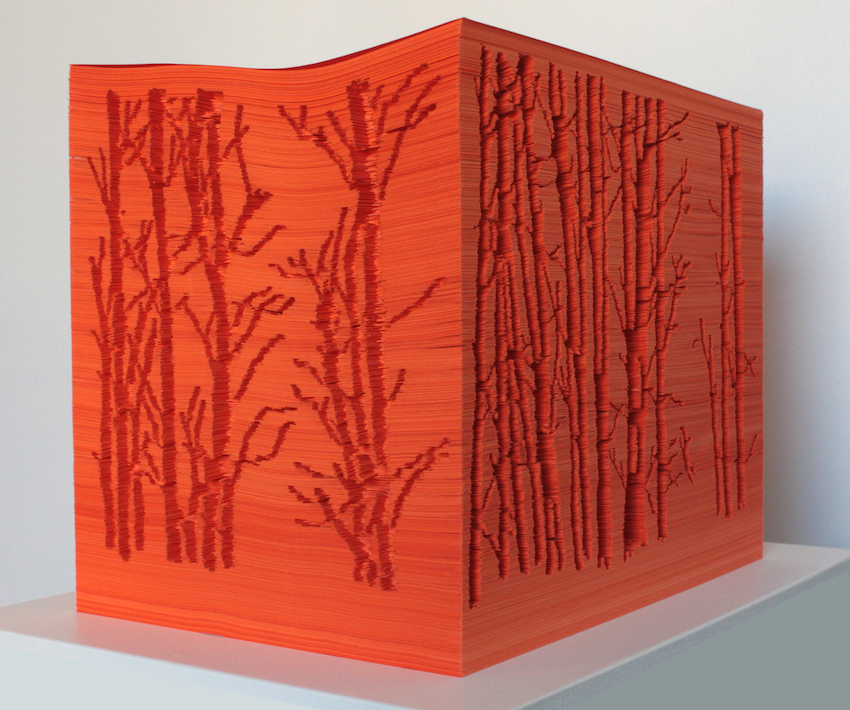 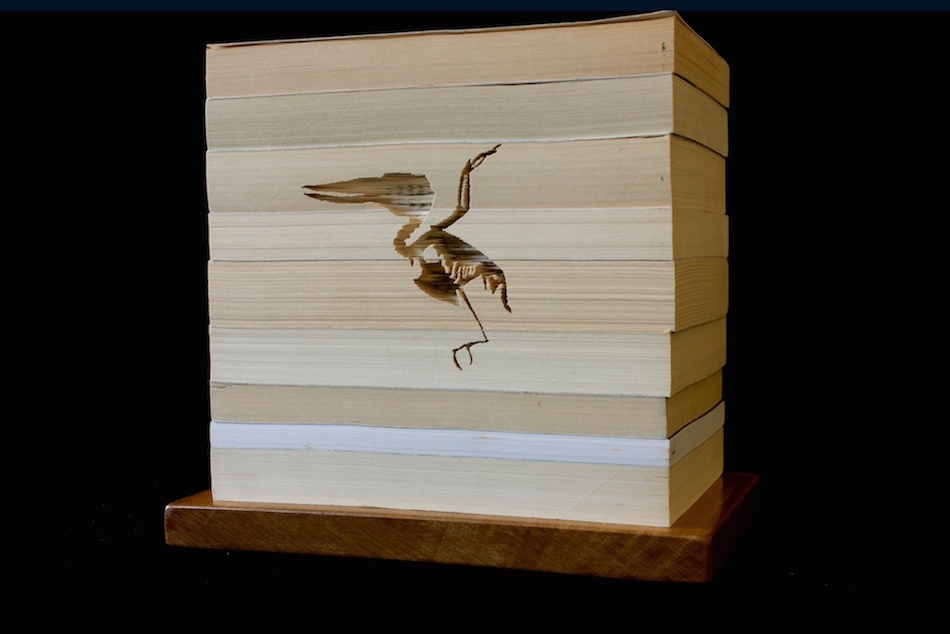 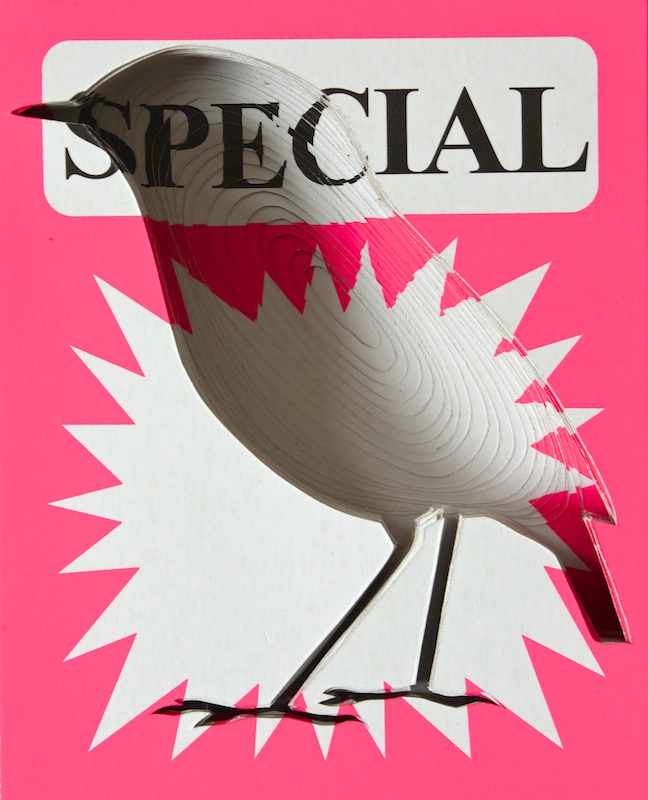 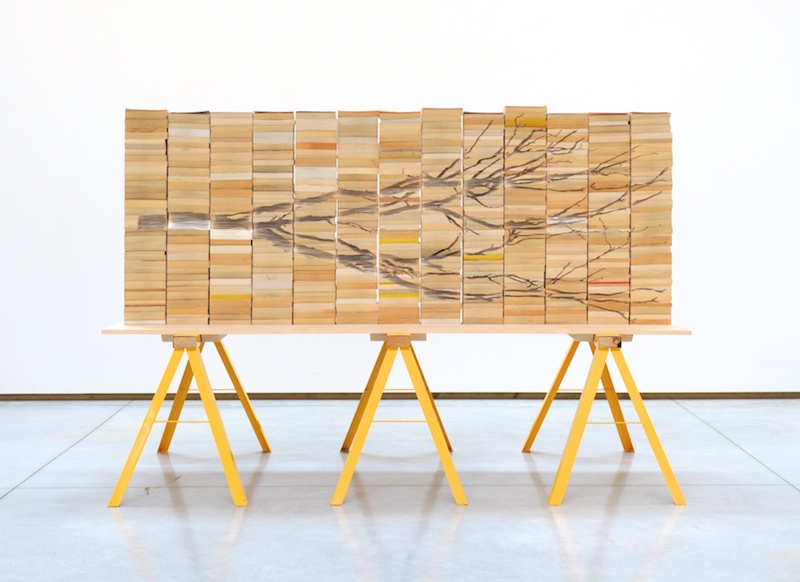 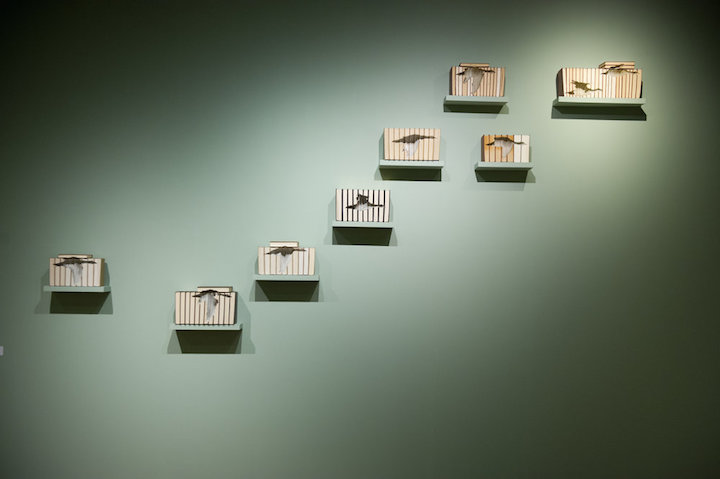 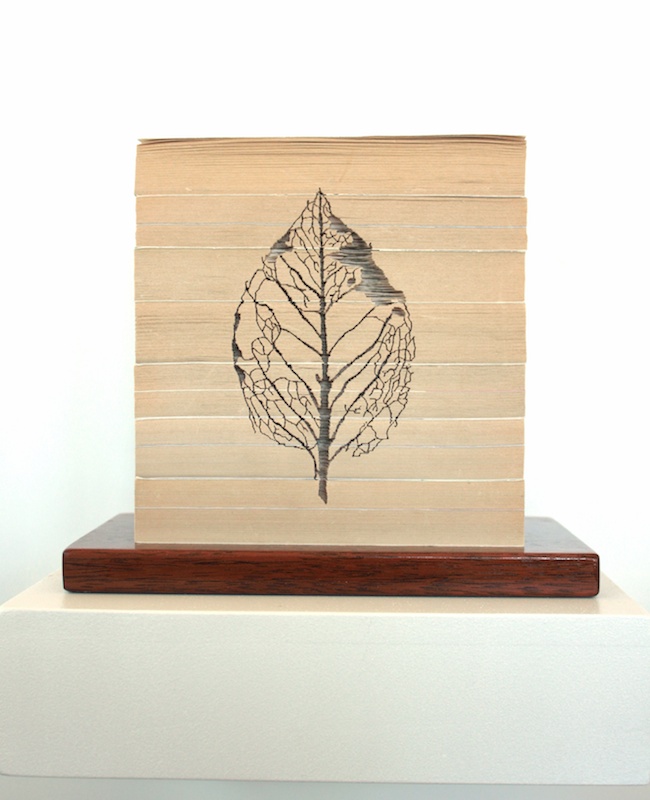 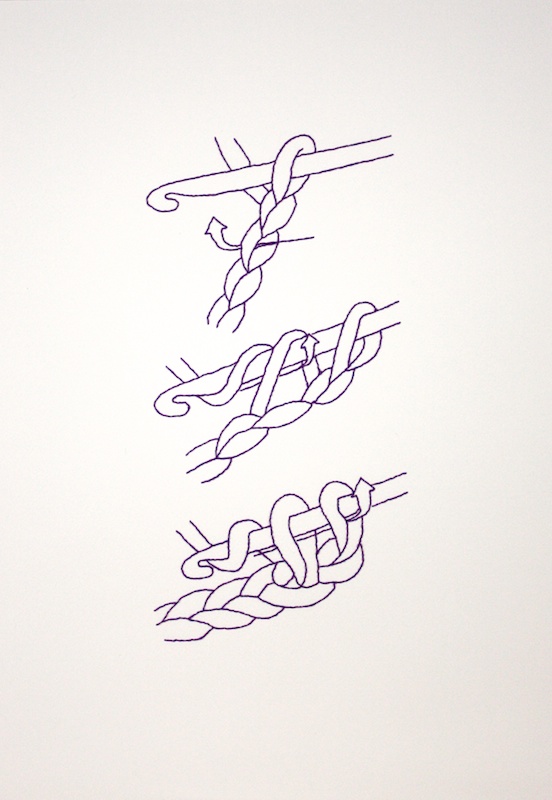 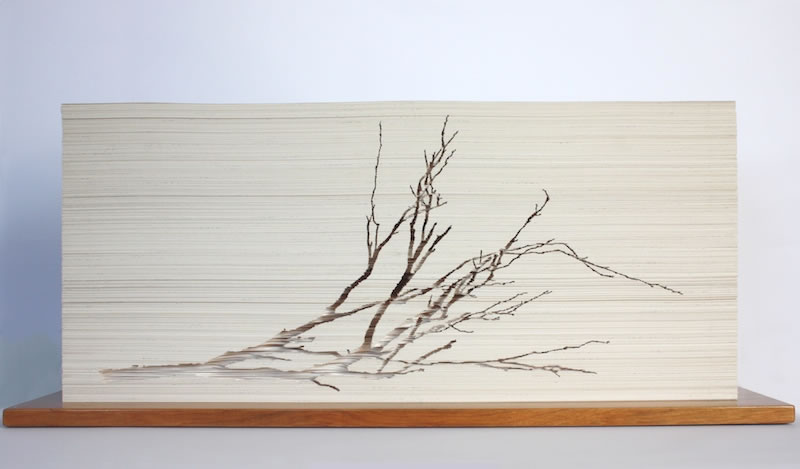 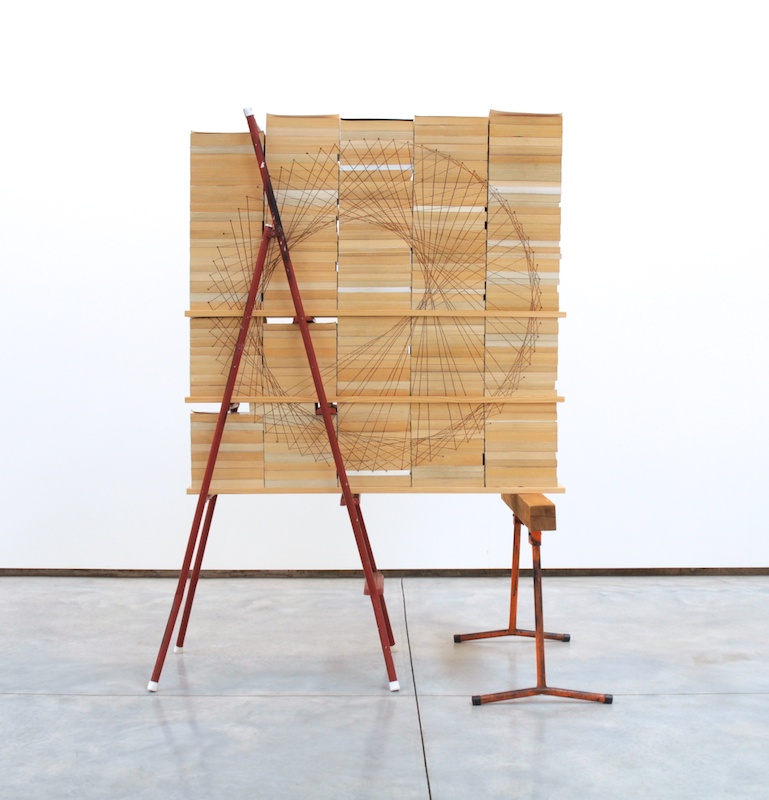 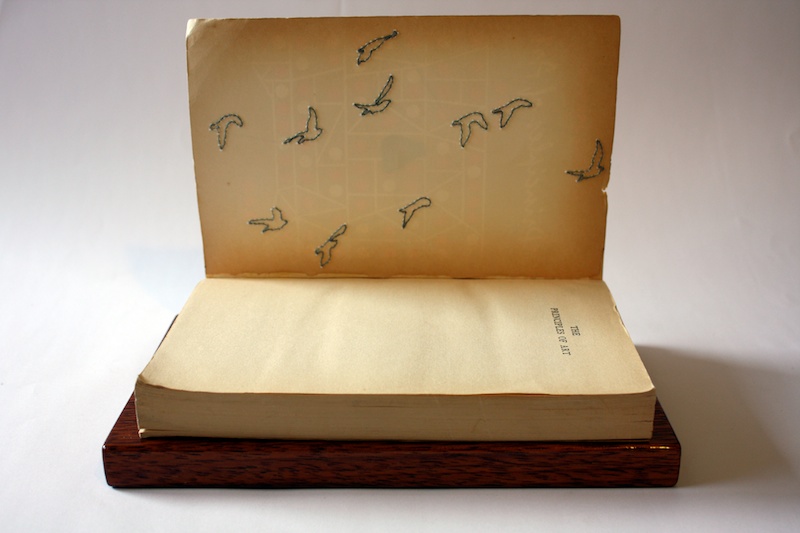 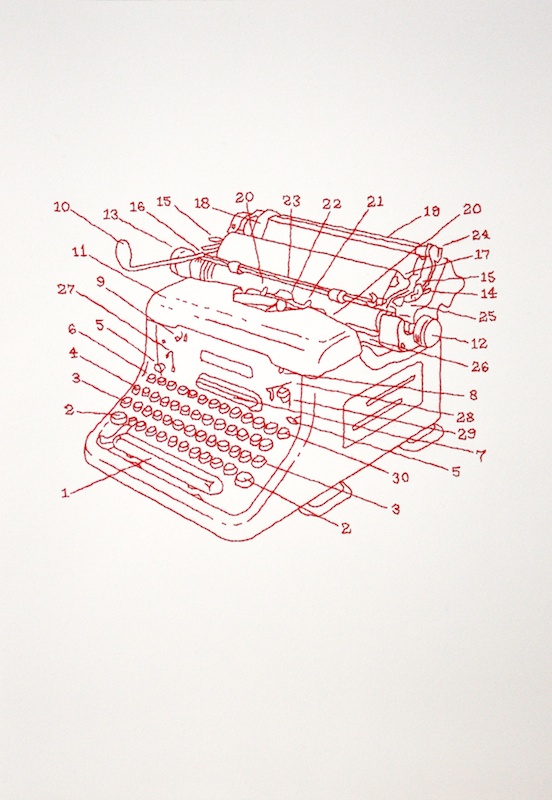 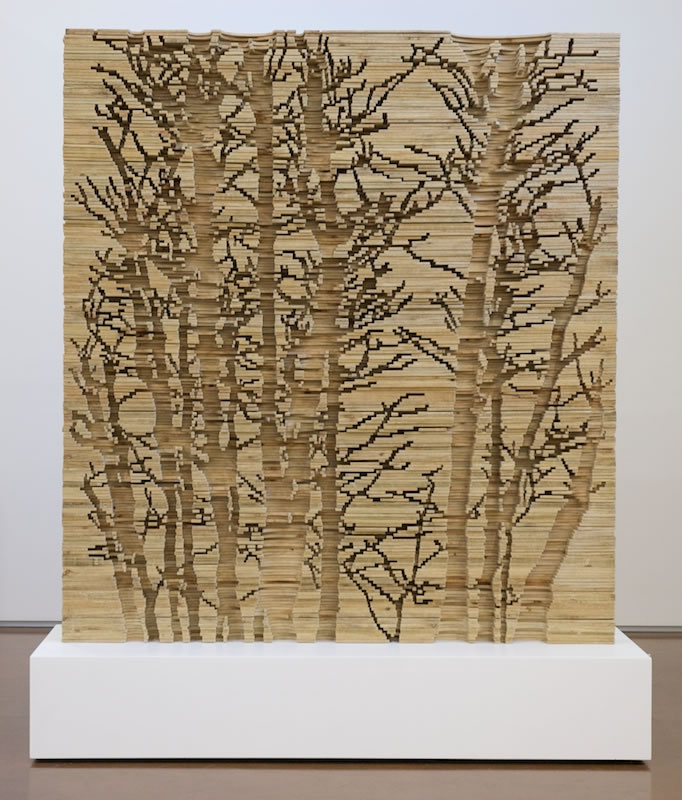 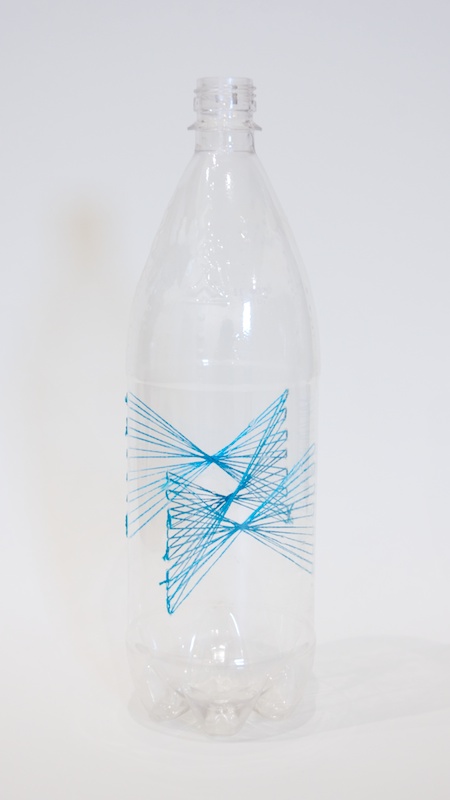 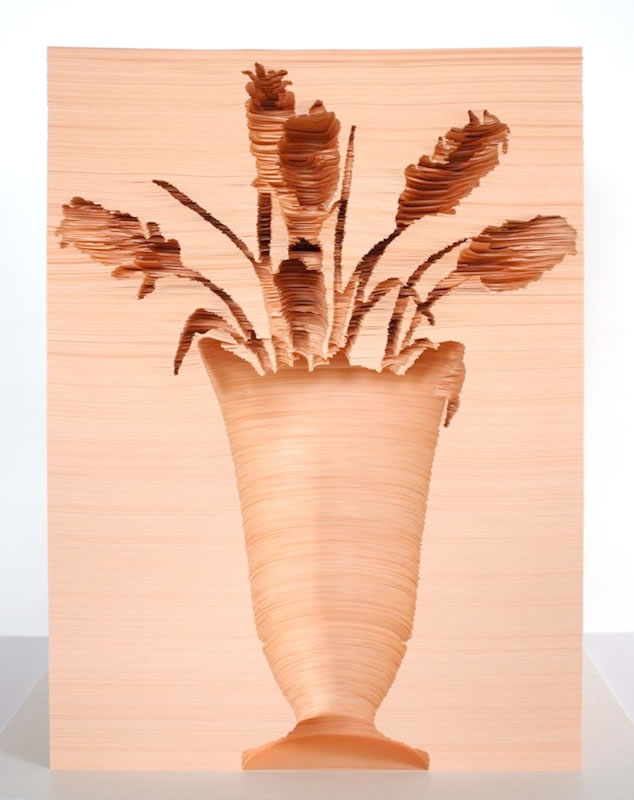 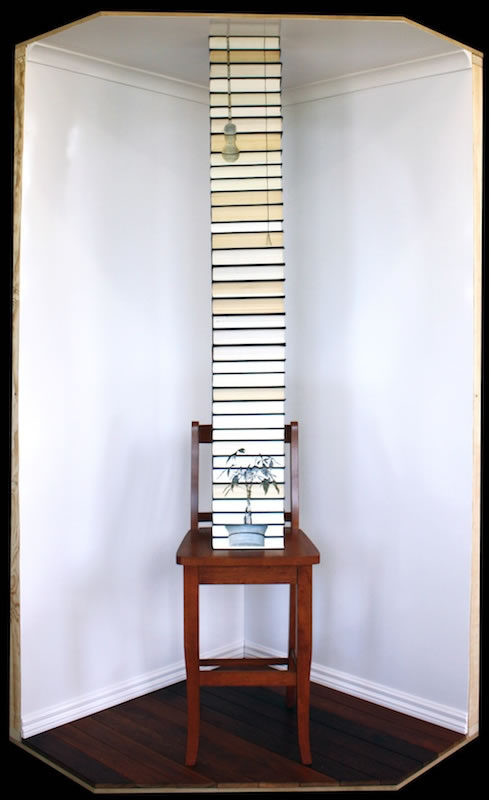 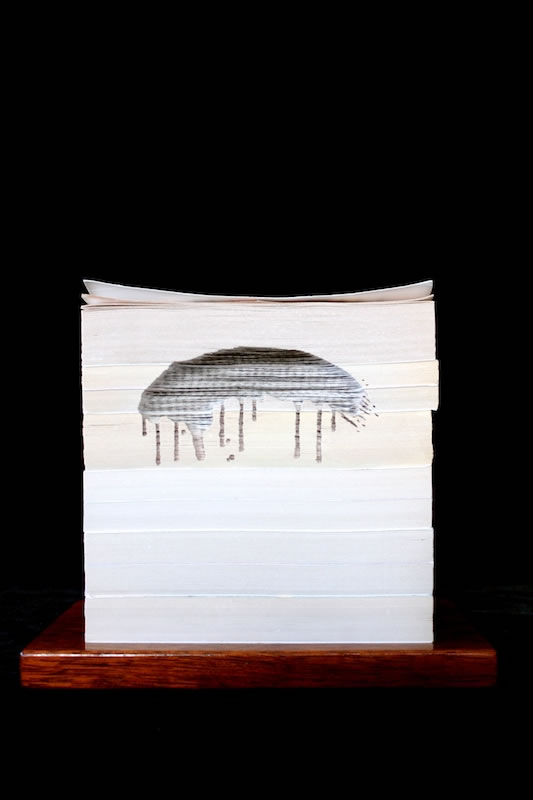 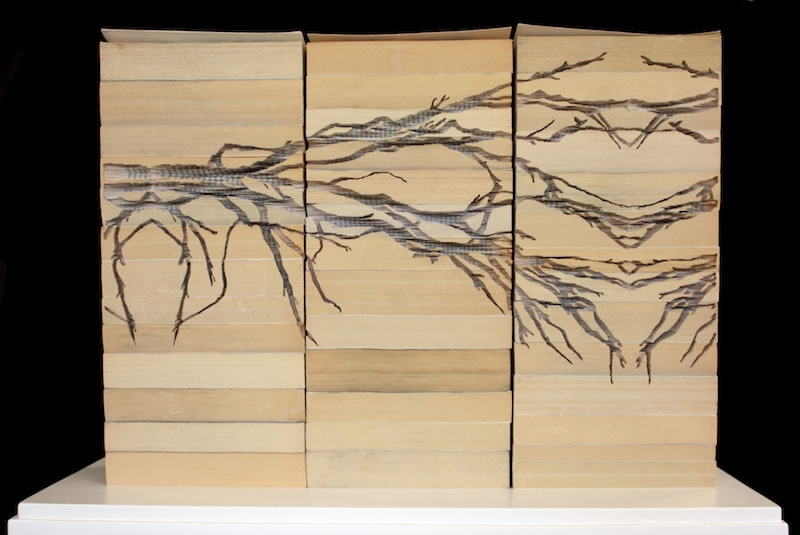 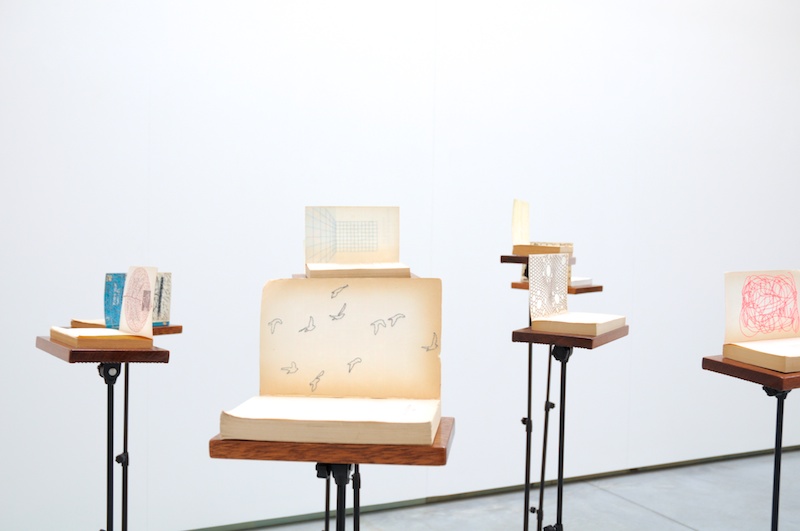 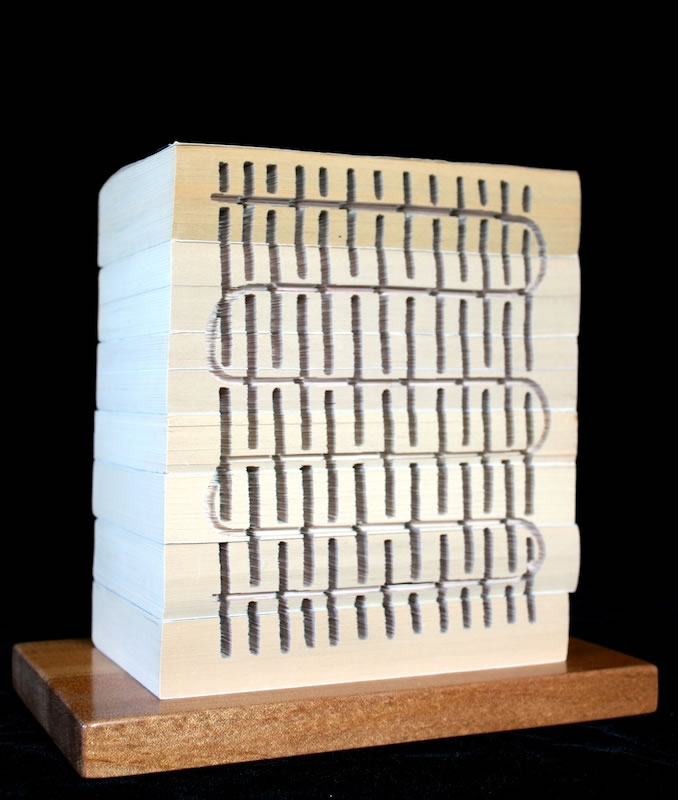 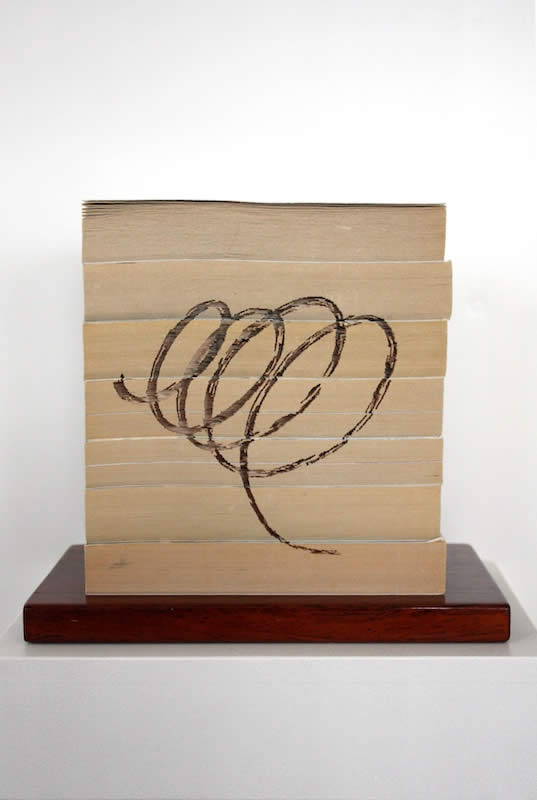 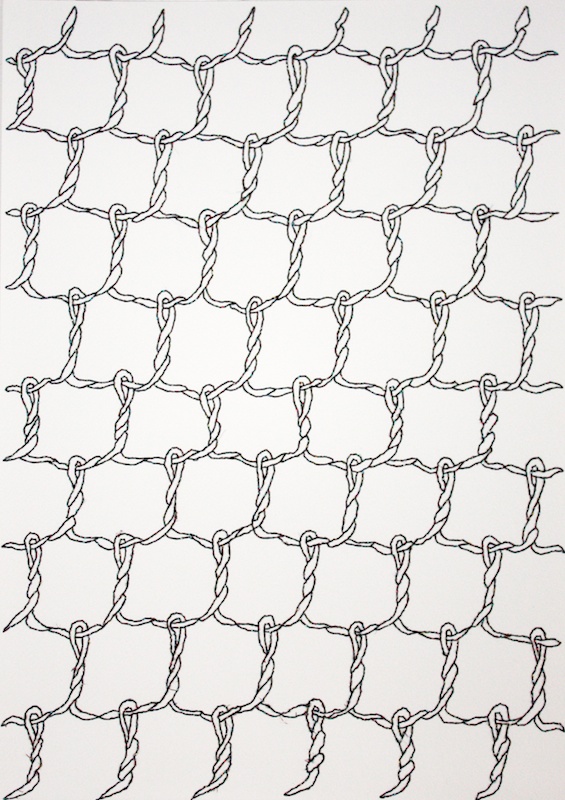 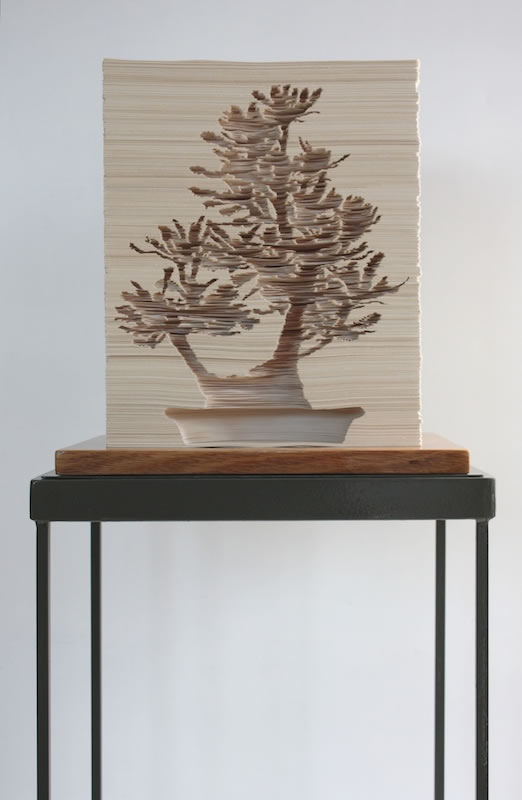 Kylie Stillman The Opposite Of Wild

Kylie Stillman Over, Under, Around and Through

Kylie Stillman The Perversity of Purpose

Kylie Stillman The Opposite Of Wild

Kylie Stillman Over, Under, Around and Through

Kylie Stillman The Perversity of Purpose

Kylie Stillman used the lingering Melbourne lockdowns to explore using new materials.  This work is made from 300 sheets of hand-cut aluminium.

Kylie Stillman is a finalist in this year's award, in which artists responded to the theme 'Return'

Kylie Stillman is a finalist in this online initiative to support artists in COVID times.

The Town Hall Gallery at the Hawthorn Arts Centre in Melbourne is opening a 20 year survey of work by Kylie Stillman, including large timber sculptures, hand stitched works on paper and her iconic hand carved books.

Kylie Stillman a finalist in this year's Art on Paper Award at Hazelhurst Gallery, Sydney.

Kylie Stillman included in this exhibition at Noosa Regional Gallery that includes artists who explore the interconnectedness of nature and humankind.

Kylie Stillman was awarded the inaugural Eucalyptus Commission to install a sculpture outside Castlemaine Art Museum in Victoria, as part of the Castemaine State Festival.

Kylie Stillman is the winner of the acquisitive 2019 Montalto Sculpture Prize on the Mornington Peninsula.

The newly completed Bunjil Place Galllery in Narre Warren, Victoria has as its summer exhibition Trace, an exploration of artists using innovative and unconventional methods of drawing, featuring Kylie Stillman.

Kylie Stillman a finalist in the NWOP exhibition at Mornington Peninsula Regional Gallery.

Excess leather bound volumes of Parliamentary proceedings have provided an opportunity for the Parliament House Art Collection to engage with artists to create new artworks that reinterpret, re-use and recycle these incredibly evocative objects. Includes Simryn Gill and Kylie Stillman.

Kylie Stillman: All the better to see you with, Fairy Tales TransformedUntil March 4, 2018

Featuring international and Australian artists, All the better to see you with explores artists' use of the fairy tale to express social concerns and anxieties surrounding issues such as the abuse of power, injustice and exploitation. Includes Kylie Stillman.

Kylie Stillman presents the 'Opposite of Wild' at Linden New Art, Melbourne

The Opposite of Wild is a new body of work created specifically for the Linden New Art's temporary space at Domain House, Melbourne.

Local Branch is a commissioned work Kylie Stillman created from over 500 paperback books 'weeded' from the Hawkesbury Library collection. The work is featured in the exhibition 'Chose your own adventure' at the Hawkesbury Regional Gallery.

Congratulations Kylie Stillman, a finalist in the Fleurieu Art Prize.

Read Sharne Wolff's lovely review of Stillman's show 'Over, Under, Around and Through' here:

Find work by Kylie Stillman in the exhibition

‘Re-Writing the Image: Text as Art', at the

have just arrived in the gallery, after being exhibited in Ex Libris at Geelong Art Gallery.

New Kylie Stillman book carvings will be included in ‘Ex libris - the book in contemporary art’ at Geelong Gallery from 22 February to 25 May 2014.

Kylie Stillman's exhibition ‘The Perversity of Purpose’ is now showing.

‘The Perversity of Purpose’, an exhibition of new sculpture by Kylie Stillman, will be opening on Saturday 3 August from 3 – 5pm. Save the date!

Works by Kylie Stillman will feature in ‘Air Born’, an exhibition looking at contemporary art inspired by birds, at the McClelland Gallery & Sculpture Park, from 23 June to 6 October 2013.

Kylie Stillman's work will be featured in 'Wonderland: New Contempory Art from Australia' at the Museum of Contempory Art, Taipei from11 February –15 April 2012.

Also, see the arist's work in a window installation, 'The Opposite of Wild', on view from the street at 39-41 Arnold St, South Yarra until 13 March.

Check out Kylie Stillman's large-scale installation in the Hermès store window on Market Street in the Sydney CBD.

Kylie Stillman's largest paper work to date was commissioned for the Westpac Corporate Art Collection. The tryptich sculpture Banksias is made from three stacks of computer paper positioned on an old style banker's desk, and was inspired by a visit to the archives in Westpac's Martin Place building.

Kylie has a solo exhibition opening in November at Gippsland Art Gallery in Sale, Victoria. The exhibition dates are 20 November 2010 to 2 January, 2011 and it will be officially opened on Friday 3 December by Christopher Hodges.

Kylie Stillman's is an art of reduction, where presence is born of absence. In the last ten years Stillman has built a practice based on voids and negative space, carved from inert materials such as books and stacks of paper. Through this language of absence she fathoms fantastic menageries of plants and animals, faithfully presented in concise nomenclature...